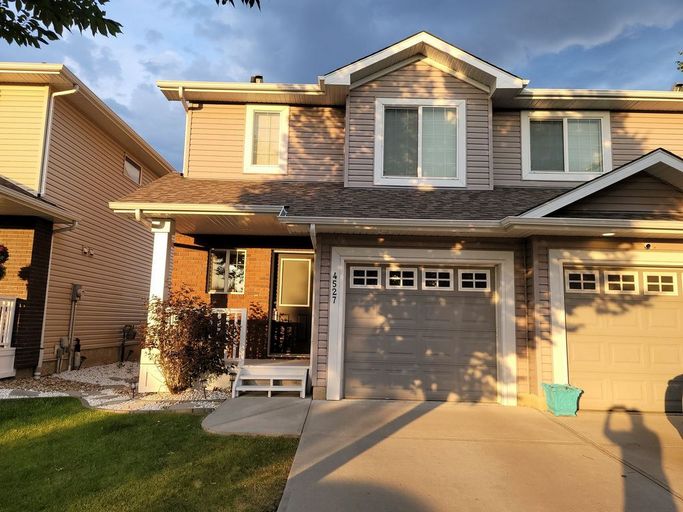 Send to a Friend

This 3 bedrooms and 2.5 Bath half duplex has hardwood floors leading to a large kitchen with stainless steel appliances, beautiful wood cabinets and open dining area. The open living room has a cozy gas fireplace. This home features custom blinds and energy efficient lights throughout. Upstairs you will find a 4 piece bath and 3 good-sized bedrooms including the primary bedroom with a large closet and a 3 piece ensuite. The easy to maintain backyard is fully fenced and landscaped with a deck. The fully finished basement has a huge family room and provides plenty of space for storage! This home is perfect for a young family. Great location with quick access to the Henday, schools, parks, shopping and all amenities.

The Hamptons neighbourhood is one of three located in The Grange Area Structure Plan (ASP), and it defines the southern boundary of the ASP. The Glastonbury and Granville neighbourhoods are located to the north of The Hamptons, both of which are under various stages of construction. The Hamptons is bounded by 62nd Avenue to the north, Anthony Henday Drive to the east, Lessard Road to the south, and Winterburn Road to the west.

The plan for the neighbourhood was approved by City Council in the late 1990s, and development began in the early 2000s. As of 2009, The Hamptons was still actively under construction. Once complete, the housing split within the neighbourhood will be 70 percent low-density and 30 percent medium-density residential units. As of 2006, almost all built units were low-density in character (single- and semi-detached).

The Hamptons is essentially bounded on all sides by arterial roadways. A looping collector roadway provides access from the arterial roadways and brings access to the local roadway network. The neighbourhood incorporates linkages throughout the community via the stormwater management system of lakes and dry ponds, planned walkways, and dispersed and passive park sites. Two school/park sites have been planned for the neighbourhood, but they have not yet been developed with educational facilities.

Commercial services are located nearby in the Glastonbury neighbourhood along 199th Street, and easy access to the Anthony Henday ring road provides residents with efficient access to employment, service, and institutional locations throughout the city.

Neighbourhoods within The Grange ASP refer back to a period in England’s past when estates were known as granges. The Hamptons refers to London’s Hampton court, which was the favoured residence of King Henry VIII.